Schedule a free consulation at info@dowlingfinancial.ie, or fill our the form and we will follow up with you shortly.

Tell us about yourself

Value of residential property in Ireland up by 5.3bn euro in last 12 months

SEVEN HUNDRED AND fifteen properties worth €1 million or more have been sold in Ireland so far this year, according to the latest Wealth Report from Daft.ie.

The report, which analysed trends in the property market, found that the number of homeowners in Ireland whose property is worth €1 million or more – making them “property millionaires” – currently stands at 1,463.

The highest concentration of property millionaires is in Dublin’s Dalkey with 276, followed by Ranelagh (252) and Ballsbridge (235).

Researchers found the value of all residential property in Ireland now stands at over €519 billion, up from €514 billion a year ago, representing a daily increase of €15m.

The report notes that almost all of this increase – just over €5.1bn – has come from newly built homes adding to the stock of housing.

“While Ireland’s homeowners may disagree, adding extra housing wealth through building more homes – rather than pushing up the value of existing homes – is the healthier way of doing so, at least in a country where there is strong demand for accommodation,” said Ronan Lyons, an economist at Trinity College Dublin and author of the Daft.ie Wealth Report.

“There is, of course, a link between the two: the more new homes are built, the less likely it is that the value of existing homes will soar.”

By comparison, the least expensive market is in Roscommon, with the average asking price in Ballaghaderreen, Roscommon some €681,000 cheaper than Mount Merrion at €96,000. It remains the only market in the country where property values are below €100,000.

The report notes that in each case these were the most expensive markets in their region by some distance. 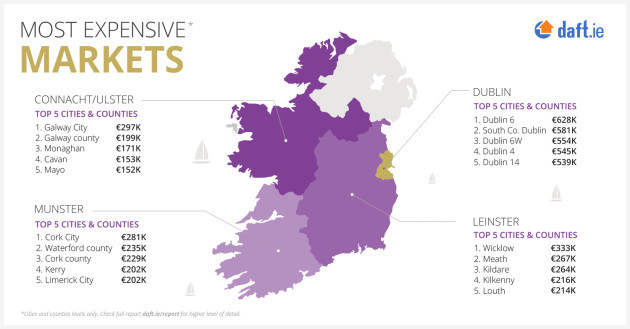 Lyons says the concentration of the most expensive markets has remained in Dublin because those areas have far fewer smaller properties than some other markets, especially those in Dublin 4 and 6.

“As the country heads into the 2020s, and homes continue to get built, it remains to be seen how the increase in the number of properties compares with the change in average values. From society’s perspective at least, more is merrier,” said Lyons.